Home NewsIncreasing Safety Awareness One Car At a Time

Increasing Safety Awareness One Car At a Time 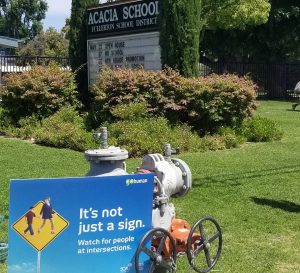 Student safety is a priority for all of us.  But are you willing to knock on doors in your community, visit local businesses and attend City Council meetings to promote it?  Meet “passionate about safety” Laurie Bruneau, Director of Risk Management for the Fullerton School District (FSD), who has done just that to promote “Go Human” at her schools and in her community.  In an era of distracted drivers and fast-paced living, little “humans” walking to and from school are especially vulnerable.  Laurie shares “I have been concerned that schools have become commuter schools with parents blasting through parking lots without ever noticing” the students.   Laurie had been seeking a safety solution when she noticed a Go Human billboard, which humanized the pedestrian.

Go Human is a program offered by Southern California Association of Governments (SCAG) to reduce traffic in Southern California by promoting walking and bicycling.  But to do that, you have to make it safe for pedestrians.  Laurie reached out to SCAG and through their grant program was able to get an initial supply of signs and materials to launch her safety campaign to encourage drivers to be more aware of pedestrians and slow down, especially around schools.  Then she had to get the school principals onboard to provide the education in the classrooms, encourage parent awareness through PTA reminders and newsletters, then post signs around the school campuses.   Now she’s getting her community involved.  She has attended City Council meetings to encourage them to embrace the program and is reaching out to local businesses to place Go Human awareness signs in their windows.

Is the program working? According to Chad Hammitt, Assistant Superintendent Personnel Services for Fullerton School District, the District had noticed an “uptick in parents transporting students to school and near misses were on the rise.”  Now all of the FSD schools have embraced the program with crossing guards reporting fewer close calls.  More importantly, children are now reminding their parents when noticing their distracted driving habits, leading to a new generation of more aware drivers.

So what are the next steps for Ms. Bruneau’s Go Human safety campaign?  She is contacting Cal State Fullerton to encourage their promotion of the program since the university is a such big part of the Fullerton community.  Laurie also plans to develop signs for the district’s white fleet and to “encourage more community champions for the Go Human program to carry on the safety message.”  Way to go safety champion, Laurie Bruneau, for protecting the little humans of Fullerton along with creating a safer community!